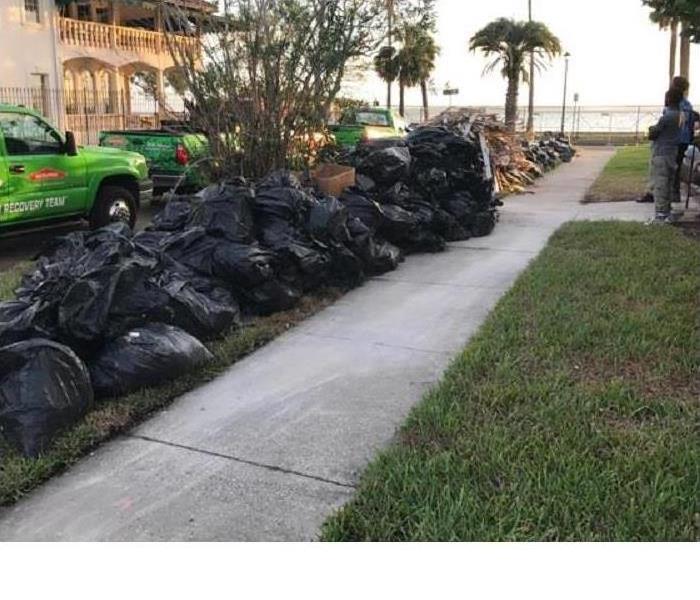 Storms caused significant damage to our area. We were able to remove debris from some of the structures that were damaged. Call us right away.

For Pearl River residents, storms are nearly a routine part of life. Most merely make the rivers rise a bit and maybe force animals to move from one part of the nearby Wildlife Management Area to another. The stronger storms, as we all know, can cause far more and longer lasting problems.

Everyone who has been through a massive storm knows that one of the more difficult aspects to remediating flood damage in Pearl River is the smell. SERVPRO response teams know that with floodwater, the possible sources could be soil, sewage, garbage, animal waste, and carcasses, along with the mildew and moisture left behind when it starts to recede.

These different sources cause various odors and require a variety of methods to combat all of them. Often, it takes more than one method to eliminate them all.

Often, team members start with Masking Agents. These are pleasant odors they used to block the foul or malodors initially. Technicians set them out as time release beads to make a work environment easier to operate in or cover mild odors until they dissipate.

If the malodors are in the air system, team members use Filtration and Absorption Agents. The activated charcoal absorbs moisture, humidity, and even some oils, trapping and eliminating the malodors contained in them.

When malodors are a result of mildew and fungus, it takes Disinfectants and Sanitizers to get rid of them. SERVPRO technicians spray them directly onto surfaces using a hand pump or power sprayer. They also help eliminate the growth of mold spores.

For stronger malodors, team members use Pairing Agents to eliminate them. They disperse them using a fogger device so the particles pair with the malodors, causing them to fall out of the air for cleaning and flood damage removal.

The final method is to use is Ozone Gas. Technicians use an ozone generator that creates a cloud of particles which can penetrate surfaces as far as the original malodor particles. The altered oxygen combines with the malodors, changing their molecular structure, and neutralized them. It is necessary to remove all residents, pets, and plants from the home before turning on the device.

At SERVPRO of Slidell, we want to return our neighbors to their homes as quickly and safely as we can complete work. If you have a lingering malodor or any other type of flood damage in your home, call us today at (985) 649-1516 to begin the restoration process.